With my sustainability background and my personal ideas on traffic management in urban environment, i silently congratulated the UAE government for taking such a great initiative in a city like Dubai where cars are deeply anchored in the urban planning and mentalities.

I focused on the article over my breakfast tea, nodding with interest, until I realized that this day was actually...today. Well done for planning, dude. I do not have a car of my own yet (my impressions on driving here will come later, surely) and I had not planned to move from my chair unless to take a stroll in the Marina. I just fell suddenly powerless and even useless, and I wondered how many people were actually aware of this day that is generally well followed in European cities such as Copenhagen. I did not see or read any outreach campaign online, while it would be supported in public offices, shops, schools, public transports, or even in the streets...elsewhere.

The article mentions that "In the last year’s campaign over 3500 vehicle owners did not use their vehicles resulting in a reduction of 10.5 tons of carbon emission." Fair enough, it is already a good thing as a principle. However I just wonder not only how they actually managed to monitor such a number, but also how relevant it can be: car pooling/sharing is not common, and you generally only have one person per car (which possibly means 2 to 3 cars per household). In my mind, this means that only a few have responded to the Car Free call.

It also reminds me a very interesting conversation with my friend Jenni on cycling in the Middle East. In her blog The Urban Observer she discusses the potential for cycling in Doha, which is pretty much next door. Following the article we were a few to exchange on cycling options in the region. My main concern was that while there are theoretically opportunities, public interest and governmental money to develop pedestrians- and bike-friendly infrastructure, the urban culture (and its bad deviations such as the obvious lack of security and awareness,  and the urban planning itself) unfortunately does not make it a realistic option in Dubai. And I do miss my good old second-hand Danish bike to go from one part of the city to another.

Am I also the only one to see blood on the car sign rather than something more friendly and engaging?! 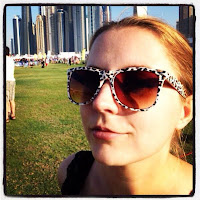 French-Swedish expat in Dubai since June 2012, trying to make my way around.